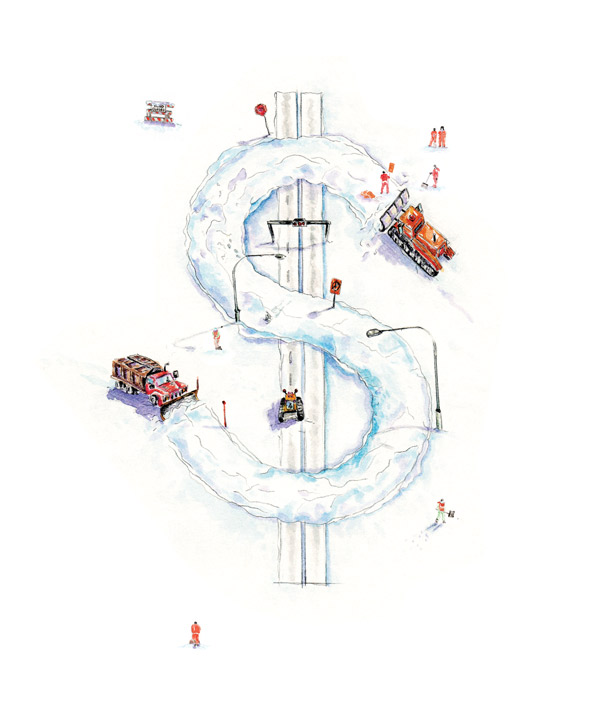 “Any journalist and editor will always prefer to run a hard-hitting investigative story like this that does include named sources.” –Drew Nelles

The threat to snow plow workers is real. Weeks before Maisonneuve released the Winter 2011 issue, a projectile akin to a Molotov cocktail was thrown through the window of a snow removal company in Pierrefonds, a borough on the west-side of Montreal Island. The Gazette, Montreal’s largest English daily newspaper, wrote a story about the dangers of being in the snow plow trade. They spoke with an owner who had his business firebombed the month prior, and another source spoke about how two of his snow plows were set ablaze, costing $60,000 in losses. The three people mentioned in the story, all business owners, were quoted anonymously with no reference to their company.

Maclean’s magazine also made headlines in 2010 with a cover declaring Quebec as “the most corrupt province in Canada.” The feature story inside spoke to broader terms of Quebec’s corrupt politicians and their effect on appointing judges, as well as Mafia ties to price-fixing construction projects across the province. The 2700-word story includes testimony from provincial commissions, quotes from a variety of previous newspaper stories, as well as original interviews with politicians and a business ethics professor. Every single quote in the story has full attribution.

Jake Adelstein, an investigative journalist who has written extensively about the Yakuza in Japan, wrote that he’s not willing to name sources if he feels they could be physically hurt, and he will go as far as dropping a big scoop if need be. “As my mentor said many years ago, there are many, many stories; people only have one life.”

Not all journalists necessarily agree with Adelstein. Walter Cronkite, the late anchorman of CBS Evening News for 19 years, had a more laissez-faire approach to such decisions.

“I don’t think it is any of our business what the moral, political, social, or economic effect of our reporting is. I say, let’s go with the job of reporting—and let the chips fall where they may.” – Walter Cronkite

Next: The decision-making point

Previous Next
Close
Test Caption
Test Description goes like this